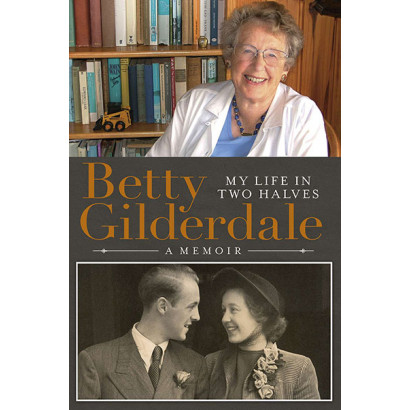 Betty Gilderdale’s story is as diverse as it is long. She is one of our foremost writers and researchers in the world of children’s literature and has been influential in the New Zealand literary scene for many years, yet she was born and brought up in London. She tells her story in two parts: the early years in England — childhood, living through the Second World War, learning Morse code and working at Cable & Wireless during the war, university and meeting her future husband, Alan — to the move to New Zealand in 1967 with their three children. They initially settled in Wanganui before moving to Auckland where Betty taught at the North Shore Teachers’ College, the Auckland College of Education and Continuing Education at the University of Auckland.
Both sections of this book make fascinating reading as Betty provides a lively and engaging account of her life and experiences, peopled by friends and colleagues and many from the New Zealand literary world who have been part of, and influential in, her professional life here. Most significantly Betty writes of her very close family and the important role they have always played in her life.
Not least is the considerable and important contribution Betty has made to New Zealand’s children’s literature through her lecturing, reviewing (she was a regular reviewer of children’s books and a columnist for the New Zealand Herald from 1973 to 1998), scholarly writing, and in her books for children. She is probably most well known for the Little Yellow Digger books, written originally for her grandchildren and all illustrated by her husband, Alan, which have been best-sellers for years.