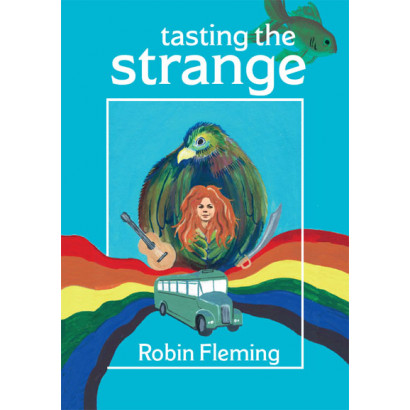 Vita (Victoria) is the child of a career scientist and an English pianist. She has a damaged heart. Unable to go outside, let alone go to school, she develops a fantasy world of pirates and brigands.
After a life-saving operation, Vita slowly and painfully tries to be ‘normal’. She struggles with school and finds acceptance with school friend, Louise. This coming of age story takes Vita on a drug-fuelled trip to Afghanistan to find her ‘father’ and enlightenment. Through her childhood ‘boy-next-door’ friend Bob and her relationship with Louise she comes to understand love.

From: Tasting the Strange, by Robin Fleming

I catch a glimpse of blue harbour between city buildings and lengthen my stride. There’s a low-tide, salty-rotten tang of mudflats on the wind. I want to be home. A ferry leaves in twenty minutes.

That’s a voice from the past. Bob Dennis? It can’t be! I swing to a stop in the crowded street.

And it really is Bob too, weaving his way through the traffic towards me, middle-aged, grey-suited, a patina of prosperity on him like the bloom on a grape.

I’m not sure I’m ready for this.

I haven’t heard from Bob since the day he found us in bed. ‘This is how it is, Bob,’ I told him then, I wasn’t going to make excuses. For a moment I thought he might hit me, but he turned and left the room, packed his stuff, grabbed a plane, and left our lives so completely that we never knew where he’d gone. That must have been, what, thirty years ago? Now, this older Bob is smiling at me as if that day had never happened.

‘It’s so good to see you, Princess.’ His old pet name; does that mean I’m forgiven? ‘What are you doing in Auckland?’

He clearly knows as little of my life as I do of his.

‘I’ve been back here for years.’

‘Good heavens! I imagined you were still in California.’

British vowels warp his New Zealand accent; he must have gone to ground in the UK. Funny how familiar he still is. I ask him where he lives.

‘We’re based in London.’

We? Is he telling me that he’s a family man, or the director of his own firm? To what career did this old hippy finally succumb?

‘You’re here on a business trip?’

He frowns. ‘No, it’s my mother. She’s gone downhill since Dad died. Alzheimer’s. I’ve come to settle her into a rest home.’ So the dreaded Mrs Dennis has come to this!

‘What brought you back to Auckland, Vita?’

Innocent question, friendly tone, but a drawing-in of his lower lip tells me that he’s expecting to be hurt.

‘My heart was playing up,’ I laugh it off. ‘The doctors ordered a quieter life.’

‘Nothing too serious?’ Bob knows too much about my leaky heart.

He doesn’t need the details; the collapse after the gig, the nightmare ambulance ride, the argument about insurance at the hospital door.

Bob is assessing me with a hazel stare. He knows me well enough to see that I’m dissembling, but he doesn’t push it.

I return his stare, searching his middle-aged face for the boy I knew so well. His once-sharp chin is buried in soft folds. The freckles I used to find so astonishing have faded to an uncertain blotchiness that gleams from the regular application of aftershave. His little nose has thickened and lost its charm. But his eyes haven’t changed. They still give him away. His tongue flicks over his lips. Here comes the question he’s afraid to ask.

‘Are you still with … ?’ He can’t bring himself to say the name.

He takes my hand. I sense feelings that he’s trying to hide. ‘Vita, we must catch up. D’you have time for a coffee?’

Doors of memory open in my mind; a tangle of emotions drags me down. I need to get away.

‘Not now, I have a ferry to catch.’ I pull my hand from his and pretend to look at my watch. ‘Heavens! I must run. Tomorrow?’

‘Not tomorrow. The packers are coming. I have to get everything out of Mother’s house by Sunday night. How about Monday?’

‘I’m staying at the Copthorne, down by the harbour.’

‘I’ll meet you at the Viaduct Basin. There are some nice cafés there. I’ll be there about eleven.’ I set off at a run towards the harbour.

As the ferry pulls out I lean on the rail and gulp great lungfuls of salty air. The harbour mirrors the huge, pale Auckland sky. Soft puffs of mirrored cloud break and stir gently as the bow wave ripples back. My racing pulse slows down.

When Bob first came into my life, harbour and sky defined my world. All I could see from my bed were clouds and sea, purple-grey islands, changing light and changing weather. In those distant, bed-bound days I passed my time in brilliant, imagined places that were more real to me than the scene outside. My companion was a fantastic creature I called Birdwoman. Then Bobby Dennis made himself my friend and, little by little, reality took over.