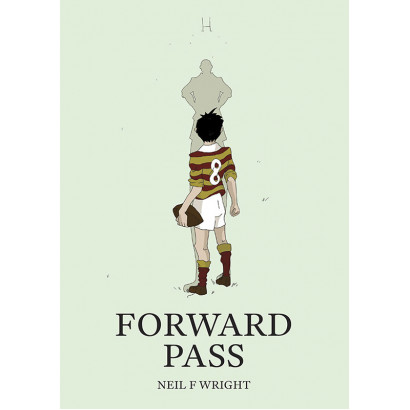 Joe Pearce has big boots to fill. His dad Kevin is a Lower Hutt rugby hero and a father he can readily admire. But life has a way of exposing our weaknesses; when Kevin reaches his limits, Joe steps up – both on and off the field – to become a man his dad can be proud of.

This novel of rugby, family and the Stokes Valley community of the ’60s and ’70s tells a vibrantly realistic story of tragedy, love, camaraderie and the epic combat of New Zealand’s most famous sport.

From: Forward Pass, by Neil Wright

“Captain – what do you want to do?” asked the Ref.

Kevin turned to his team and shouted so that all the team could hear: “Shoes!” This was the code word for the new manoeuvre to be played out – a split backline confusing the opposition about which direction the ball would be passed from the base of the scrum by the Stokes Valley halfback.

The spectators were aghast – “What the bloody hell is he playing at! Take the points man!” was the common theme. The murmur grew as it swept around the ground.

The Valley forwards unquestioningly gathered to form up to a scrum 3–4–1 formation. The hooker stood in between the props, who had now wrapped their inside arms around his back; behind them the two locks waited kneeling on the ground on one knee, one arm around each other’s back, their heads in between the prop and hookers’ hips while their other ‘outside’ arm went around the outside of each prop’s hip; the two flankers on one knee as well, with their ‘inside’ arm over their respective lock’s back and gripping onto the lock’s jersey; and the solitary Number 8 making up the last line of the scrum by putting his head in between the hips of the locks.

They would wait in this position until they engaged with the opposition scrum, whereupon all kneeling forwards would bring their knee off the ground and apply forward momentum to crunch into the opposing scrum formation, waiting for the ball to be fed into the tunnel formed between the two front rows by the halfback.

The Valley backline split their formation on command from their captain, so that behind the scrum, with the fullback up in line beside the centre, they stood in a ‘V’ formation, three men making up each ‘arm’ of the dual backlines.

Kevin then made his mistake. After the Valley forwards had formed up behind their front row (who were still standing upright), Kevin glanced behind him to ensure that the backline was in place as they had practised. It was a novel plan, and not one that they had executed before, so he wanted to ensure his players had got it right . . . this was a ‘do or die’ last chance effort.

Campbell, Kevin’s opposing prop, muttered something to his pack.

The Taita forwards quickly formed their own scrum formation, three in front, four binding in behind them and one man binding in the third row. Campbell immediately bent over at the waist, forcing his fellow front rowers to do likewise, and gave the order to “engage” – to lunge into the open midriffs of the unsuspecting and upright Valley front row. Kevin, Bumper and Jazz were taken by surprise and were knocked backwards onto the ground, scattering the Valley locks and flankers in the process.

The impetus took the Taita scrum formation right over the top of the trapped front row, and after the melee two Valley players were left lying on the ground. Kevin, bleeding profusely from a gash to his head, was gripping his broken right knee with his hand, agony twisting its way across his bloodied face while, with his other hand, he frantically tried to roll his unconscious hooker and mate Bumper over onto his side to prevent him from swallowing his own tongue.

Those who saw what had happened said that Campbell was the one doing all the damage by stomping over the fallen opposition players, while the rest of the Taita pack were doing their best to step over the trapped men.

Both Kevin and Bumper were carried off. Bumper regained consciousness but was having great difficulty breathing. The ambulance was called and took them both away to hospital, Kevin’s heavily pregnant wife and son by his side.

Pat Campbell complained to the Ref that the Valley scrum had collapsed on impact and Taita was not at fault. The Ref had been distracted by the Stokes Valley backline formation and couldn’t rule on what he didn’t see. He ordered the scrum to be reset once replacements had come on.

Without Kevin and Bumper the scrum was lost before it even started. The Stokes Valley halfback fed the ball into the scrum, and the heavier Taita pack shoved the lighter Valley pack back off the ball, allowing Taita to win the tighthead and boot the ball out over the sideline.

Time was up – the whistle blew and the game was over. Final score 9–6 to Taita.

The Valley clubrooms were quiet afterwards, with members waiting for any report about Kevin and Bumper. Jackie rang through at 8pm, telling Club President Alan Nairn that Bumper had two broken ribs, one just missing his lungs by a hair’s breadth. She then broke down over the phone when she tried to tell him about Kevin’s injury . . . but she managed to say that “he will never be able to play again”; the knee was so badly damaged it could never withstand the pressure of a scrum.

Fourteen of the Taita Senior team refused to go to their own clubrooms that night as a mark of their disgust at what happened. The fifteenth went out alone, rolled into the nearest pub and got himself drunk.