DJar (second edition): part one of Of a Note in a Cosmic Song 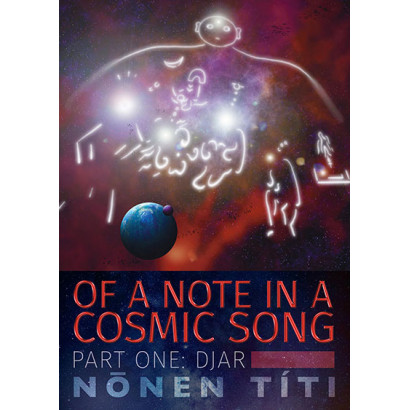 A new planet.
A new life.
A one-way trip.

The colonists of DJar, all seeking a better future, each with their own past, and their own beliefs about right and wrong, try everything they can to create a new government and a new culture they can all be happy with.

To stay, and die at sixty-five, or to go on a dangerous one-way journey through space?
But what if choosing to chase your dreams into the stars can mean leaving behind one of your children?

From: Of a Note in a Cosmic Song - Part One: DJar (second edition), by Nonen Titi

The words formed the waves of the ocean for a lonely painted boat on the otherwise-featureless courtroom wall: The Kabin of Justice Sails by the Wind of Objectivity.

The prosecutor was a young man not yet four kor old. When he called for the little girl, his unexpected witness in a trial that should have been over yesterday, he had every intention of remaining objective. He had been the one to ask for the postponment, and it had taken some time to convince the legal representatives and the jury members to give up their holiday — this being the last day of the year — but all were eager to see this case concluded as soon as possible.

So this last day of the trial had started early in the morning with a summary of yesterday’s proceedings: The defending lawyer stressed that the case dealt with the Society’s right to practice its ceremonies, and that neither the defendant nor his son had denied the physical act involved but claimed it was an accepted ritual to which all members of their religious order consented.

The prosecutor refused to see any act of corporal punishment as a religious ceremony. He had pointed out that the boy, at seventeen, was still underage, so he could not consent to anything by law, which made this child abuse. This had been followed by a long discussion about the meaning of the words ‘penance’ and ‘abuse’, and it was nearly midday when he finally called on his young witness.

The child, wearing a yellow dress, climbed the seat next to the orange-robed judge, her socks scrunched around her ankles despite her mother’s attempts to pull them straight. With her feet dangling above the floor she gave the defendant a smile. She was on stage.

The defendant, Lenag, had just turned sixty and so was halfway through his last kor of life; the white of his suit statement more than attire. Seeing the brief hint of concern on Lenag’s face when he recognized the child, the prosecutor knew that his hunch had been correct and he started by asking the little girl where she’d been that night.

She answered confidently and in a loud voice, the way he had instructed her, and told the room that she’d been at a sleepover at her best friend’s home. She’d seen the adults when asking for a drink of water because she couldn’t sleep.

Was she aware that these people belonged to the Sacred Praise Society?

She answered yes, most people in Kolnuia, where she lived, did. She stated clearly that her own family didn’t believe that Bue, the big star, was a divine being, but that had nothing to do with her friendship.

Did she know the defendant and the victim?

Yes, she did. They were her best friend’s grandfather and uncle.

Next the prosecutor explained to her that hitting was a crime and that she was here to tell what exactly it was she’d seen that night; that the defendant and his son both said they had been at a ceremony but the court didn’t believe that to be true.

“But if they say so it must be true, because it’s their belief,” she answered.

Amused by her precociousness, the prosecutor allowed her the moment of glory and waited for the audience to silence itself.

“Did you see who was being beaten?” he asked then.

“Yes.” She pointed to the defendant’s youngest son. The prosecutor nodded his approval of her clear answers and pointed at Lenag.

“Was that man doing the beating?”

Lenag ignored the child smiling at him.

“Can you point to the person who was doing the beating?”

The girl scanned the room, then shrugged. “There was lots of people there.”

“There were a lot of people there. Was this man there?” the prosecutor asked, indicating the lawyer he was standing in front of.

“No.” When she shook her head her braids swayed along.

“Was this woman there?”

The jury member he meant turned red in the face at the suggestion.

The child shook her head again. “No.”

The prosecutor walked around the room, randomly picking out people and repeating his question. To the girl it was a game.

“Was this woman there?” he asked, stopping at Lenag’s daughter-in-law, who sat among a large group of members of the religious commune.

“It was her home,” the little girl answered, sounding impatient.

“I asked if she was there!”

For a moment the child seemed uncertain, but then she defiantly frowned at his abruptness and answered, “Yes.”

“Was this man there?” The prosecutor continued, now pointing at Sotyar, the defendant’s oldest son and the victim's brother.

“Was he doing the beating?”

The lawyer objected but was overruled.

In the front row her mother nodded for the child to answer the question, which the prosecutor repeated. He reminded her that she was here to speak the truth which, he had promised her, would help the defendant.

He thanked her and returned to his seat. She’d performed well. The old judge had to shout to silence the audience, after which the lawyer attempted a rescue mission: If the boy himself had admitted that it had been his father and not his brother hitting him, could it be that she was mistaken, as it had been late and she’d been tired?

Quite adamantly she answered, “No.”

The lawyer had no more questions. The judge told the child to leave the stage. Lenag turned his head away when she walked by him.

The prosecutor, not about to lose this psychological advantage, approached the bench and requested that the hearing continue without delay. He handed the judge and the lawyer a copy of the records — mandatory before any person could be called to justice — which he’d ordered yesterday and which, he promised both of them, showed no flaws in the state of Sotyar’s home, or in his willingness to co-operate at the last health inspection. In addition there were no reports of earlier misconduct and his genetic record showed no criminal potential, which gave him an excellent chance of being let off with just two years as a user. Sotyar had graduated Learners with a creator certificate, which was more than the prosecutor had expected from a Society member.

The judge ignored the lawyer’s protest, called the room to order and told the jury members to return to their assigned seats before announcing his intention to continue with the hearing, this time with Sotyar as the defendant.

After a short whispering session with the lawyer, Sotyar, who was  the same age as the prosecutor, took his father’s place, but he remained seated when all stood to wait for the judge.

“The state of Geveler against Sotyar, identification KN3K4C,” the clerk announced, walking up to the new defendant.

“I swear to nobody but Bue,” Sotyar told him.

Taking his second tranquillizer for the day, the judge poked his fat index finger into Sotyar’s direction. “You will promise to speak the truth for this court.”

“If you’re not willing to take my word without that, you won’t take my promise either,” Sotyar replied.

He also refused to address the judge as ‘Your Honour’. “What honour?” he asked.

The prosecutor glanced at the judge, whom he thought had a bigger ego than his intelligence should allow. He quietly admired Sotyar’s principles, however this was the part of the trial that was to bring him his own victory. The little girl had been no more than a port of call to reset the course.

The room, still restless with the sudden turn of events, only went quiet when the prosecutor asked Sotyar for an explicit description of the ceremony. Sotyar complied; a momentary flicker in his eyes was the only indication that he was aware of the sensation his words provoked in many members of the audience.

“You realize that physical contact of that sort is unlawful by the Geveler Civil Rights act?” the prosecutor asked him.

“What civil rights? Those you preach or those that exist only for the city people?”

“This is not a discussion. I ask the questions and you answer them.”

“We speak our own justice,” Sotyar replied with a defiant smile. No doubt he enjoyed this game of words. He was out to shock and he was succeeding.

“Who gave you the right to decide that your justice stands above that of the court?” the prosecutor demanded.

“Because our justice is based on ethical values, not on the political power of the state,” Sotyar answered, just a little too quickly.

The prosecutor left it at that. Sotyar wasn’t ready to denounce his faith for Geveler laws, nor would he lie, though he wasn’t going to be ordered into promising that. That was his right.

The defence lawyer did his best to compensate but the damage was done. The jury members returned at the exact end of the compulsory thirty-two minute deliberation period. They were all eager to go home for the New Year’s celebration tomorrow. Another half an hour later the prosecutor stood outside.

In front of the courthouse, the judge kicked a pebble down the marble steps as he stated for camera that today had been a great victory for justice and otacy.

That night a news reporter summarized events for the viewers at home:

“The head of the Sacred Praise Society was charged with leading the members of his sect to acts of violence, misguiding the system and lying in court. He will spend the remaining four years of his life as a user in service of the state. He humiliated himself when the verdicts were read by begging the judge to spare his son.

“Sotyar, who sat emotionless throughout the whole trial, was convicted of physical abuse as well as with contempt of court and will be travelling to the Land Beyond tomorrow.

“As a result of his victory, the prosecutor has gained enough credit to become the youngest judge Geveler has ever had. It was his ability to see through the lies which enabled him, in his own words, ‘to take control of the kabin as it was sailing in the wrong direction’.

“The defence felt disappointed because it was still the majority vote that was meant to protect the rights of the minority.

“The eight-year-old girl who was a key witness for the prosecution, said she was sorry it was over because now she had to go back to Learners.”

The newest judge of Geveler turned off his screen. Justice had been done according to the law. There was no more to be said about it. 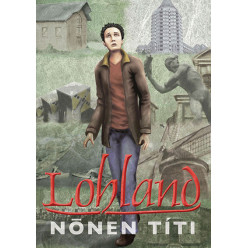 Lohland (second edition)
Thirteen-year-old Kaie does fine at school and takes a lot of responsibility at home despite his par..
$30.00 $9.99 text_tax$8.69
Add to Cart
Add to Wish List 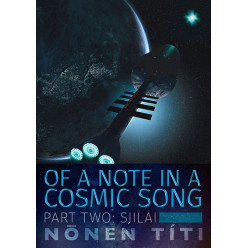 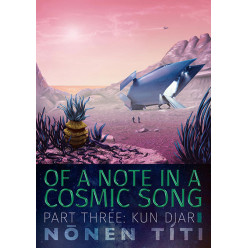 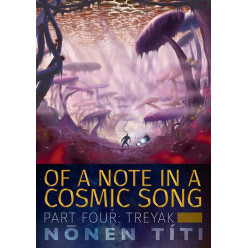 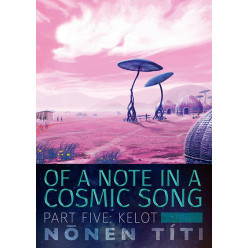