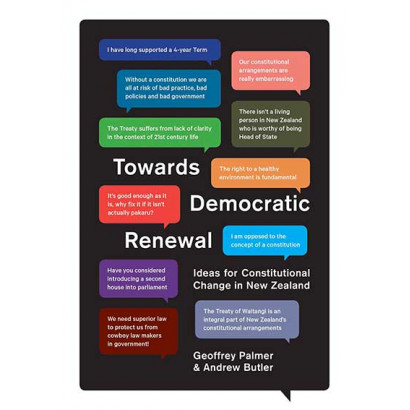 In 2016, Sir Geoffrey Palmer and Andrew Butler proposed and published a written, codified constitution for Aotearoa New Zealand. Since then the authors have travelled the country, discussing with the public the nature of New Zealand's identity and where the country is headed. After considering their conversations and formal submissions, this second book - with its revised proposal for a codified constitution - is the product of a year in development.
Towards Democratic Renewal reinforces Palmer and Butler’s argument for a robust and democratic framework that will safeguard our political system against future challenges, from climate change to earthquakes, ‘post-truth’ politics and surveillance. This clear, revised constitution defines and entrenches government accountability and transparency, protects the rights of our peoples and tangata whenua, and offers transformative steps to uphold the sovereignty and integrity of Aotearoa New Zealand.
CONTENTS
1   Why a constitution is important
2   Our constitutional vision
3   What the public told us
4   A Constitution based on principle
5   The State and a New Zealand republic
6   The Government
7   Local government
8   The Parliament
9   Why New Zealand does not need an upper house
10   The Judiciary
11   Integrity and transparency
12   Bill of Rights
13   The Treaty of Waitangi and the constitution
14   More people need to know how government works
15   Elections are not enough
16   Deepening citizen engagement
17   The media, information and communication
18   How to build a new constitution
19   Constitution Aotearoa in English and te reo Māori

From: Towards Democratic Renewal, by Geoffrey Palmer & Andrew Butler

1 Why a constitution is important

‘Constitution’ is a word few New Zealanders are accustomed to using. It means the rules under which a democracy like ours governs itself. It is all about who has public powers, what they can do with them, what limits are established upon their use and how human rights are protected. A constitution sets out the basic institutions of government and the core values that guide the work of those institutions.

New Zealand has a most unusual constitution compared with other countries. It has no single document that can be called a constitution. Only three countries in the world find themselves in that condition: New Zealand, the United Kingdom (which is currently experiencing serious constitutional problems) and Israel.

This peculiar New Zealand situation would be fine if there was persuasive evidence that the constitutional settings in New Zealand were ideal. No doubt a considerable number of people believe that there is nothing wrong, so there is no need for change. Indeed, we have heard from a number of people that New Zealand’s nebulous, informal arrangements are the envy of many countries around the world.

We beg to differ. We believe there are serious dangers inherent in our current constitutional structures and they need to be overhauled. There remains within them a distinctly colonial tinge that is out of whack with contemporary New Zealand understandings of how political power should be exercised in a democracy.

In truth, the monarchy and its powers are a mystery to most and this is an obstacle to understanding how the system of government works in New Zealand.

The current New Zealand constitution is constantly evolving. It is free to wander where it will according to political developments. The danger is that rights and freedoms of people will be gradually whittled away, that emergencies and shocks may beset us that would require government to trespass not only upon freedoms but also upon democracy itself—and, without greater controls and oversight, it can.

The New Zealand style of government is already authoritarian. In our experience, most New Zealanders are somewhat naïve and complacent in their attitudes to public power. When New Zealand was a small and uncomplicated society it had little need for checks and balances on public power. We were not particularly diverse, and we agreed upon so much. Elections were enough; but they are not now. That is a world we have lost. We need accountability and participation from the people during whole parliamentary terms.

We need a written constitution—one that is not too long, and is easy to understand, which sets out how the major institutions of government are structured, what their powers are, to whom they are accountable and how people’s rights are protected. A constitution needs to be used by everyone within and outside government as a guide to how things work. It should be taught in schools to increase understanding of what institutions of government can and cannot do, and the rights of individuals in all of this. Such a document would transform the teaching of civics in New Zealand.

The issues with which government must deal are infinitely more complicated than they were 50 years ago. Climate change is the leading example; we have hardly scratched the surface of what it means for New Zealand in the future. One great weakness of the system of government we have lies encapsulated in that issue. We do not pay sufficient attention to the future or guard against risks that can be readily foreseen. Driven by the three-year election cycle, Governments focus on the present so that the present crowds out the future.

The challenges that New Zealand democracy will face in future are likely to be demanding. Climate change will cause big and disruptive policy changes. Geopolitical developments are also likely to be testing. Terrorism is a threat. Emergencies of one sort or another will occur. Wars and nuclear explosions may occur, as could financial collapse.

The development in the United Kingdom of the Brexit movement and the changes in the United States resulting from the presidency of Donald Trump are changing the ways in which western democracies function.1 We live in a world in which alternative facts, lies, manipulation of public opinion and ‘post-truth’ politics distort public discourse. These are dangers indeed and New Zealand does not need them. We even had alleged alternative facts in the 2017 election campaign with claims by the National Party that there was an $11.7 billion hole in the Labour Party’s fiscal plans.<2

Economic nationalism, the manipulation of public opinion through digital means and the influence of immense and powerful multinational corporations on domestic policies all threaten to change the way representative democracy has traditionally functioned. The dangers for democracy inherent in these developments are considerable. It is easy for the voice of the people to become muted and for our liberties and protections to gradually but inexorably disappear. A robust constitutional and democratic framework is a necessary protection. For example, the United States constitution— though we do not advocate a constitutional model that gives judges the final word—has been successful in halting some of President Donald Trump’s more extreme tendencies.

New Zealand is one of the world’s oldest and most stable democracies, and Kiwis are justifiably proud to live in the first country in the world to adopt universal suffrage and other significant measures. But we cannot rest on past glories.

New Zealand needs to refurbish its own democracy and be vigilant to protect its values. New Zealand is not independent from international trends and cannot afford to be complacent about its democracy. Catastrophes can befall any nation and they must be dealt with. The Christchurch and Kaikoura earthquakes are recent examples. The risks were foreseeable, and could have been better guarded against, had the issues been given sufficient priority earlier. An earthquake-prone country should have been better prepared to protect its citizens and infrastructure.

In such a world, the framework that governs decision-making needs to be in good order and condition. It needs to be clear. It needs to be transparent so people know what is going on, rights are protected and corruption is kept at bay. Law and policy need to be designed so they are effective, enforced and competently administered.

Too often in New Zealand our legislation has unexpected and unfortunate consequences. We do not examine the practical effects of much of our law and whether it has achieved the purposes to which it was directed. Too much of it is cooked up in secret with inadequate public participation in its making. Often the public is kept at a distance.

We produce policy blunders that engender poor results. Much time and effort is spent repairing them or dealing with their consequences. Think of the 29 lives lost in the Pike River Mine, a tragedy traced back to bad law, poorly administered. Think about the polluted condition of New Zealand rivers and lakes which have deteriorated rapidly as result of failures of government policy. And think of the mess New Zealand is in with housing, where young people have been priced out of the market and cannot afford homes.

The difficulty with any constitutional discussion in New Zealand is that people struggle to see how it affects them. They vote in elections and think this is about all they can do to influence the way the country is run. They do not see that how power is structured, how it is used and how the remedies against its abuse, can improve their lives. Looked at in this light there is no issue of public policy more important than the constitution; if we get that right, the prospect of better decision-making increases.

We want the powers and functions of the main elements of government set out clearly and authoritatively in a constitution that has been carefully considered and enjoys wide community support. People need to own their constitution and identify with it. At a minimum, it needs to tell us:

•how the powers of the state are defined and organised;

•how Parliament is elected and by whom, what are its functions and how it works;

•how Government is defined, what is the Cabinet and how ministers are appointed;

•what kind of judicial authority is vested in the courts;

•how the duties of the Head of State are organised as a unifying influence;

•what institutions exist that will promote integrity and transparency in public administration, the public service and public finances;

•how human rights and the rights of minorities are protected through an enforceable Bill of Rights;

•how Māori constitutional issues and te Tiriti o Waitangi/the Treaty of Waitangi are to be respected within what is now a multicultural society;

•what principles should guide local government;

•how the mechanisms of political accountability work;

•how the constitution should be able to be amended to get the right balance between entrenching core values and letting future generations adapt to their conditions.

In this book we set out what we have learned about what New Zealanders think on these issues and explain the changes we have made to our original proposals, reflecting that feedback.

The final chapter of this book contains the text of Constitution Aotearoa, which has been rendered in te reo Māori as well as in English. The two versions appear side by side at the end of this book. The translation was carried out by Kiwa Hammond of AATEA Solutions, assisted by Maakere Edwards, and peer reviewed by Māmari Stephens, senior lecturer at the Victoria University of Wellington Law School. Part of the cost of this process was supported by a supplementary grant from the Law Foundation.

2 Hamish Rutherford ‘National Accuses Labour of $11.7 billion spending Plan Error’ stuff.co.nz (online ed, 4 September 2017), available at www.stuff.co.nz/business/96470311/national-accuses-labour-of-117-billion-error-in-its-spending-plan. Despite the fact that no economist could be found who would support the view, the claim was repeated and was never withdrawn.